Journalists are inundated with a constant flood of pitches and news releases—and, as The Hustle’s Kendall Baker writes in his open letter to PR professionals, “they all suck.”

“Well, not all of them,” he concedes. “Some are fine. But the majority of the time, the pitches I get from you guys are downright awful.”

Ouch! What’s a savvy PR person to do?

The truth is, Kendall is right to give communicators a little tough love.

Journalists are busy people, and they’re sick of reading through copy-and-paste messages or emails that were blasted to hundreds of others.

They don’t have time to read through all the links you sent them on the off chance it might result in an interesting article or drive traffic to their website.

You need to give them a compelling reason why your story would add value to their publication. Otherwise, they’re going to lose interest—fast—and you’re done.

The good news is, I have a secret hack and I’d like to share it with you.

I guarantee it will help you “unsuck” your pitches.

Welcome to the next generation—the video pitch.

Take your pitches from zero to hero with video

A video pitch cures what so often ails the generic and impersonal messages which journalists like Kendall are tired of getting.

By nature, video is attention-grabbing and personal.

In fact, when I first tried a video pitch, I received nearly 50 percent higher engagement than my text-based attempts.

Not only will you leave an impression, but allowing a reporter to “meet” you over video can open up opportunities for an ongoing relationship.

(Speaking of leaving an impression, I may have given P.J. Bednarski, former editor of Online Video Daily and VidBlog, a bit of a shock when he received one of my first video pitches.)

That’s not to say that a video pitch alone is a catch-all.

Just because you’re able to capture someone’s attention with video doesn’t mean you’re off the hook when it comes to adding value to their day.

Your pitch should still demonstrate you’ve done your research on the publication and show how your piece would be of interest to their audience (or open them up to new readership).

Combine thoughtful outreach with the power of video and wait for the editor responses to come rolling in.

How to craft a great video pitch

If you’re convinced that it’s time to try a video pitch, great!

(Psst, if you don’t already have a screen-recording tool, now’s the time to download one. I love my company’s free Chrome extension, Vidyard GoVideo, but there are other tools you can use. Find something that works for you!)

That’s great in theory, but what about in practice?

I’ve rounded up a series of examples from past pitches which you can use as inspiration.

My first example comes from when I pitched our CEO for a big speaking engagement.

And I didn’t hold back on this one—I went right to the CEO and co-founder of VentureBeat, Matt Marshall.

For a guy who must get pitched ALL the time, he answered me quickly with a note saying he loved my personalized video, followed by an intro to his speaker lead. 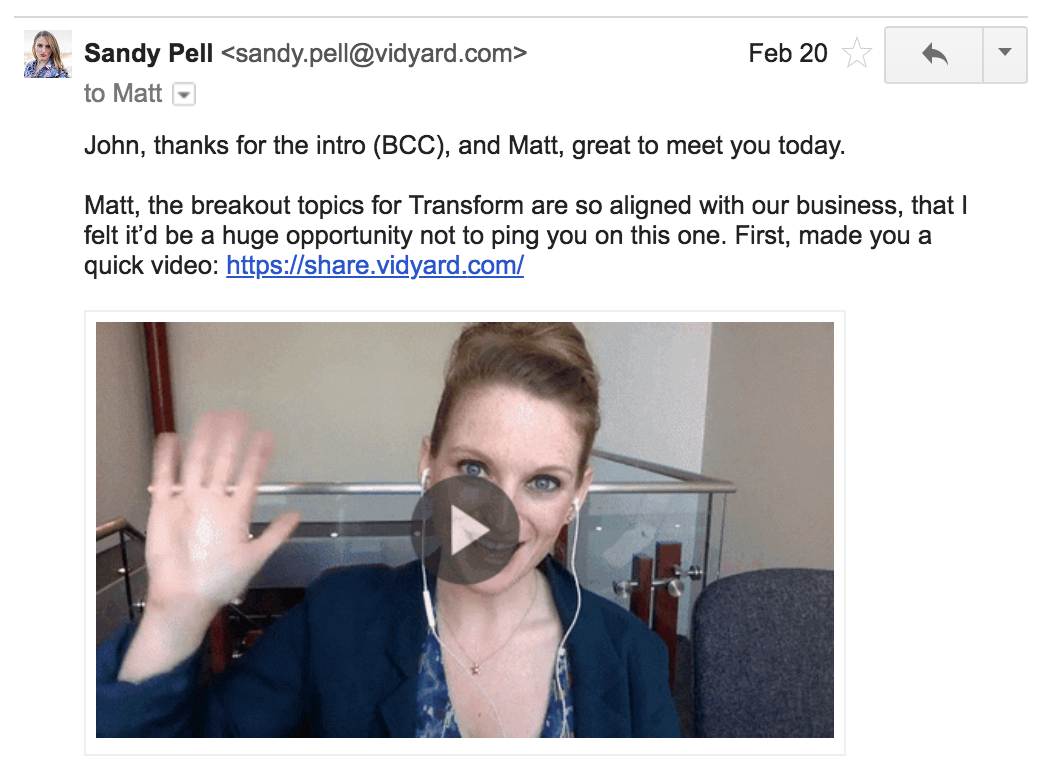 In this next instance, I was about to speak on a panel for Young Women in Business, and I didn’t know any of my fellow panelists.

I don’t know about you, but I always find it awkward walking onto a stage without having any idea who else is up there with me.

I made this video to say hello to them and break the ice in advance.

It was well-received with very warm responses!

In this subsequent example, I tried pitching the Twitter and LinkedIn universes on a recent product update, just to see what would happen.

What happened, you ask? Well, it received six Favorites (faves) and one retweet (RT), that’s what.

Video is a great way to engage on big announcement days and I’ll use this tactic in the future! 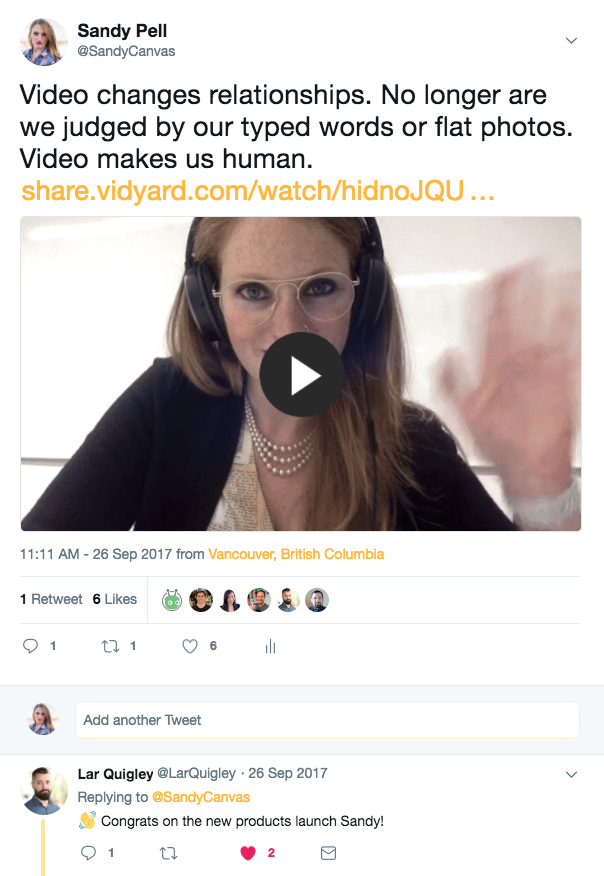 Responding to a reporter request

Reporter requests have always been an area of struggle for me.

But when I add video pitches to my replies, my odds go up two-fold.

In this example, Ashley responded immediately, offered me the spot, ended up publishing my opinions in this piece, and gave me a complete author profile.

I’ve used video-pitching ever since!

In this instance, I wanted everyone to know I was heading to the Unbounce Call to Action Conference—including some reporters who had told me they’d be onsite.

I made this video and pushed it across my Twitter and LinkedIn.

I had a ton of engagement: four RTs, a load of comments, and 15 faves!

Additionally, people who I had never seen or met before came up to me and told me they had watched my “video.” Woohoo! 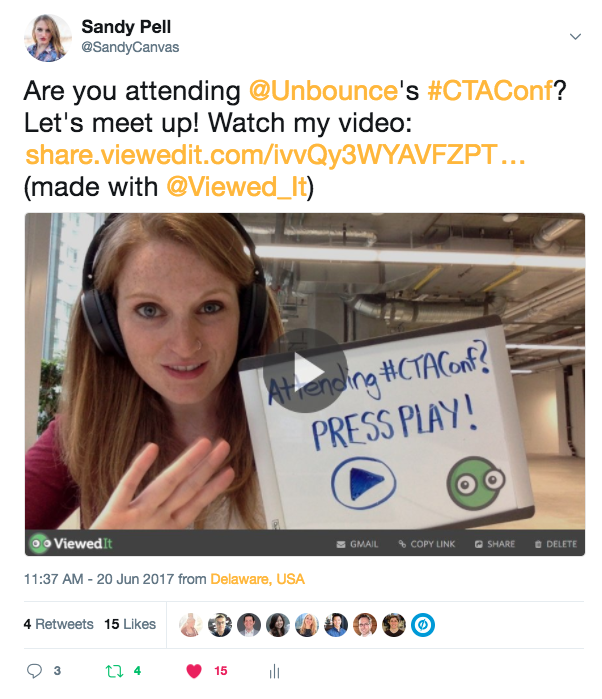 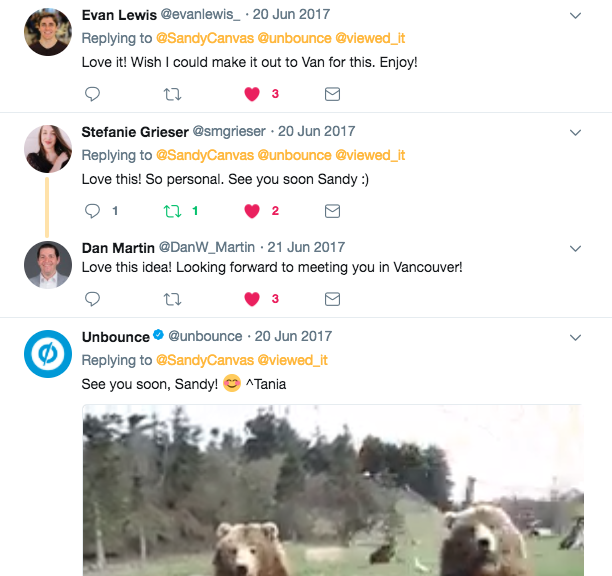 In fact, my first video was so successful that I decided to do a few follow-up videos from the Call to Action conference. I’ve included one below: 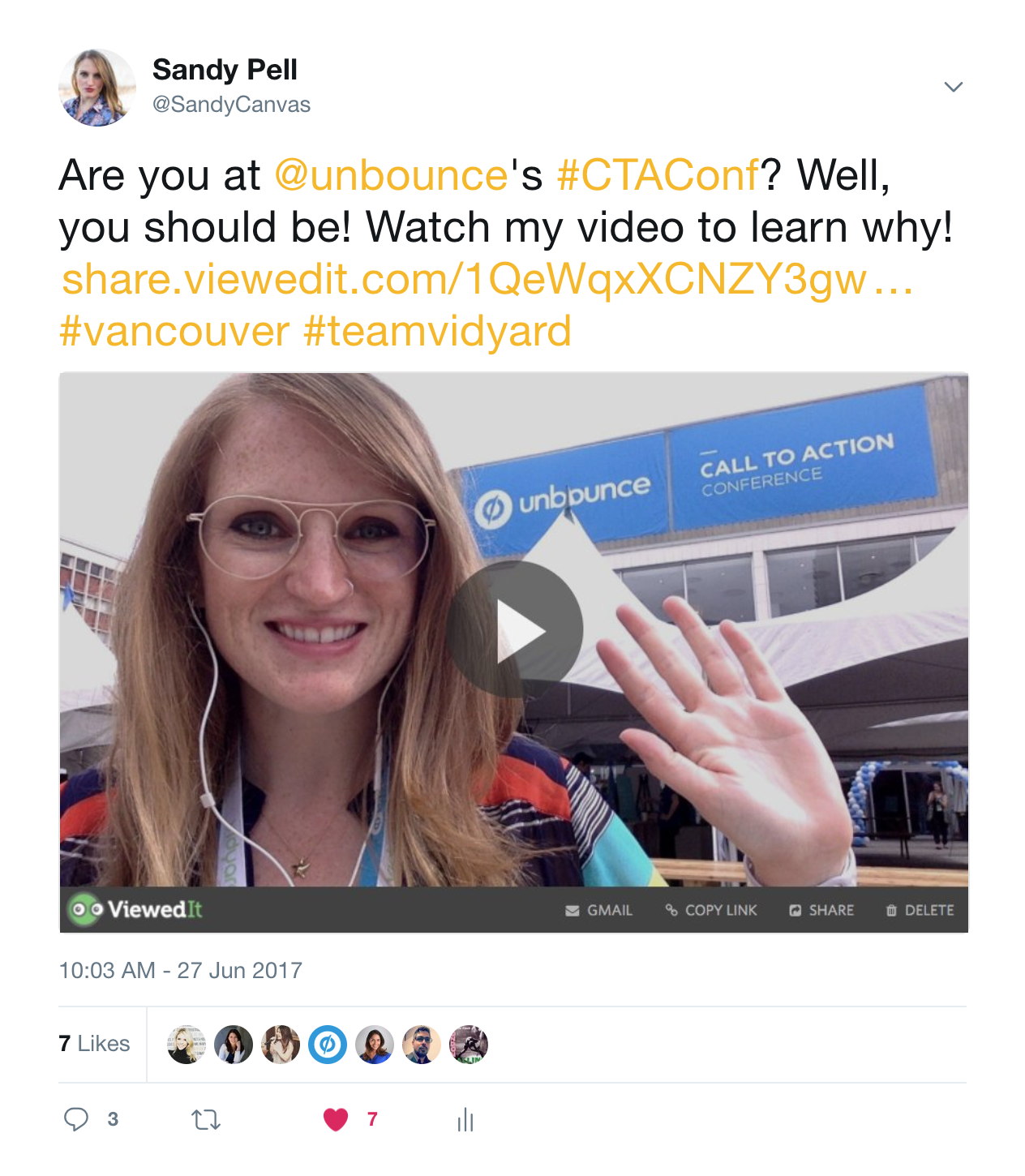 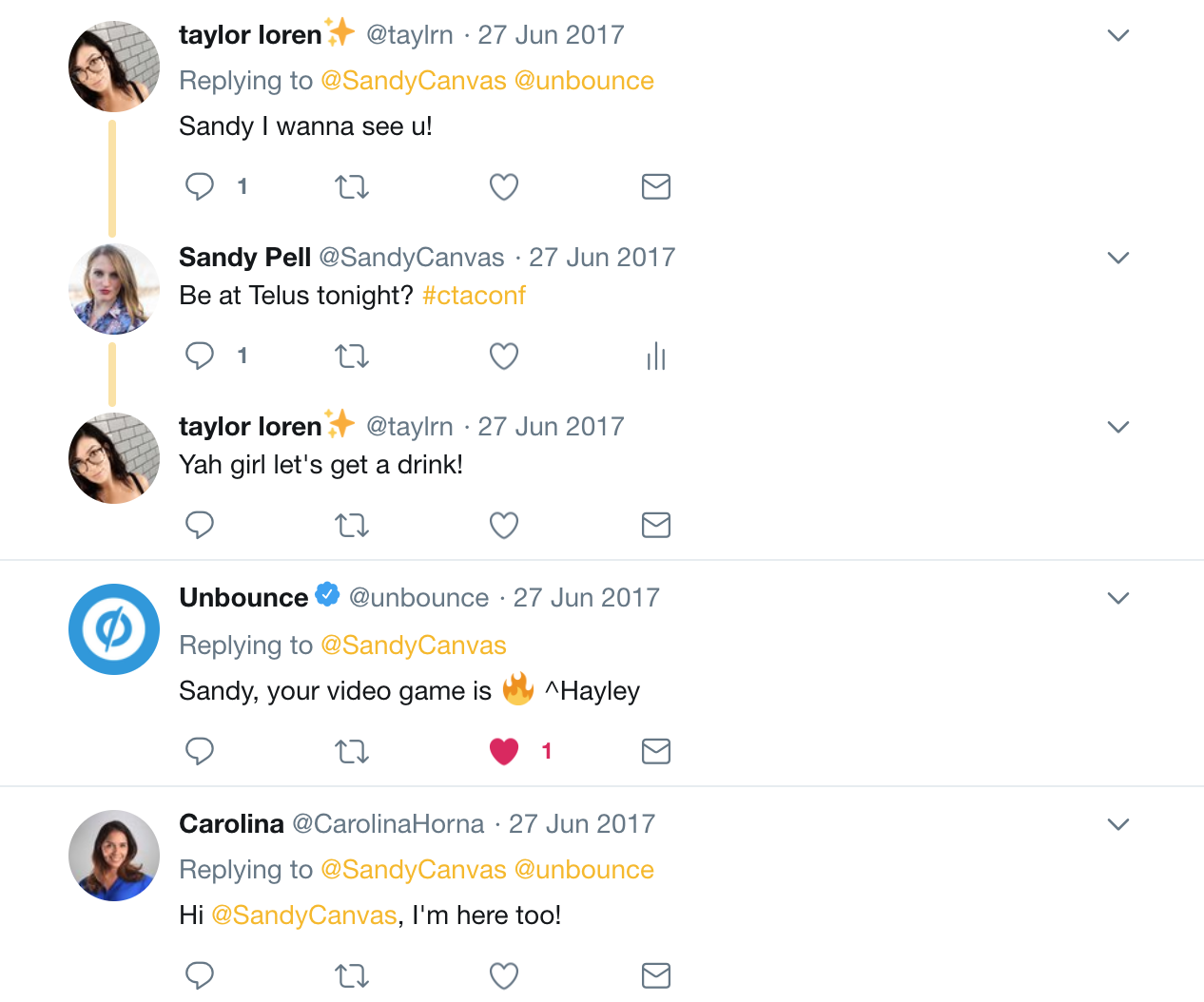 Have you already pitched a reporter?

In this next example, the reporter wrote back requesting more information on the pitch.

I decided to make a video to let them know I was on it and introduce myself to them.

Using video is a great way to build common ground and tighten up a relationship.

I know I’ve already given an example of pitching a speaker, but this next one is too good not to share!

In this final example, I was pitching our CEO, Michael Litt, to speak at an upcoming, high-end tech conference called Fortune Brainstorm Tech.

Given that Adam Lashinsky probably receives hundreds of emails per day, I didn’t expect a reply.

But the video clearly worked, and I was happy to see his response shortly after.

He even introduced me to his colleague, Marlene, to pick up the conversation. 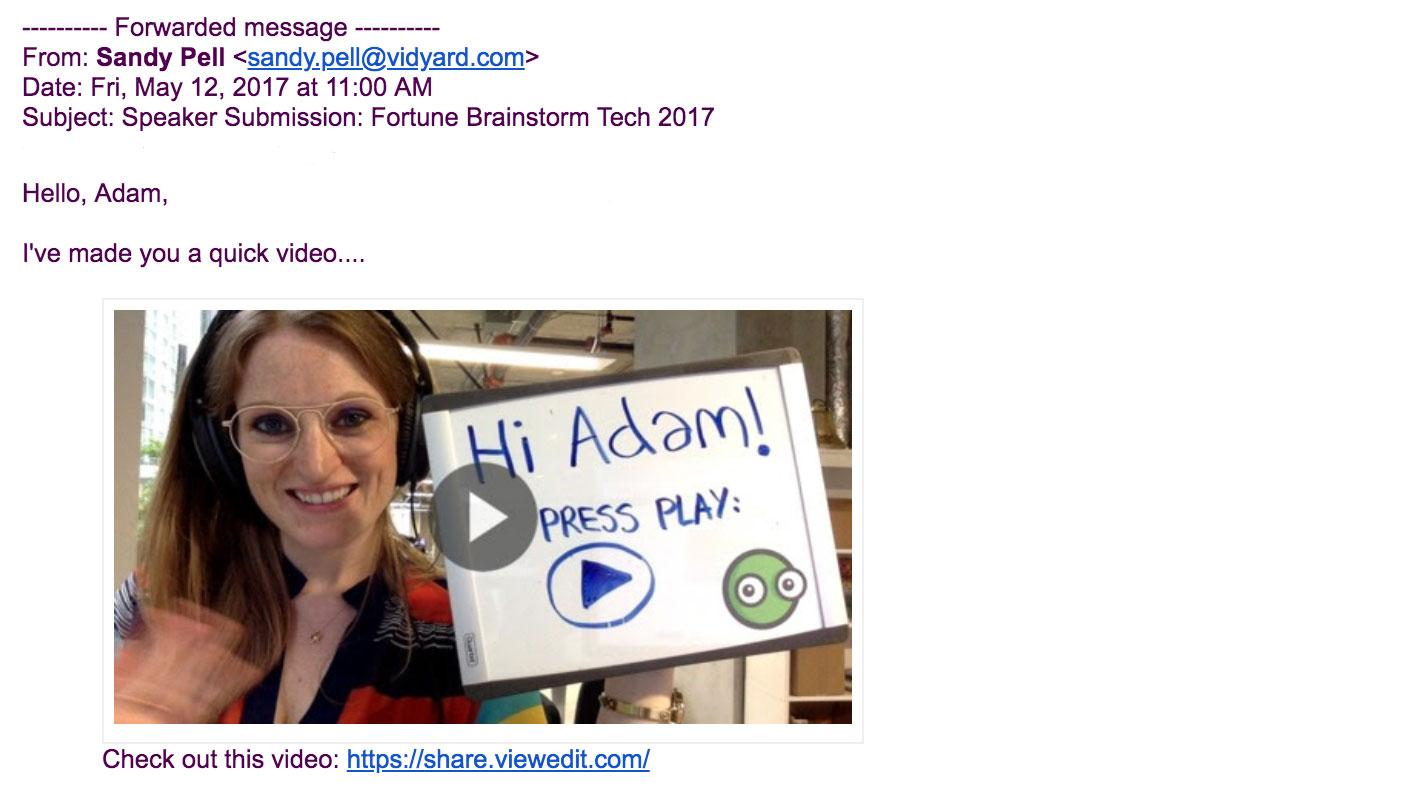 I hope this article has been helpful and that you’re excited to experiment with a video pitch.

Let me know how it goes in the comments below—I would love to hear how people respond to you when they find a video pitch in their inbox!

This article was originally published here and is reprinted with permission from the author.

Sandy Pell has led corporate communications and public relations for Canada’s hottest, high-growth, tech startups. Today, she’s at Vidyard, the video platform for business, which boasts LinkedIn, Microsoft, HubSpot, Salesforce, Marketo, and others. Prior to this, Pell led public relations at Hootsuite, the social media management platform, during its transformation from a 30-person garage startup to a global enterprise leader with more than 1000 employees and 15 million users.

Welcome to the next generation of PR practice—the video pitch.

Embracing Remote Working: What it takes to make it work

As it looks as though remote or home working is definitely here to stay for many and perhaps most, it...

How to Effectively Communicate with Employees During a Layoff: A checklist

The world is on an economic downswing as the COVID-19 crisis continues. By the end of May, as the number...

This site uses functional cookies and external scripts to improve your experience.

NOTE: These settings will only apply to the browser and device you are currently using.

For the collection of user data via Adobe Dynamic Tag Manager so that we can better understand our users and whether or not our website is appropriately serving their needs.

For the collection of user data via Pardot so that we can better understand our users and whether or not our website is appropriately serving their needs.

For the collection of user data via Facebook pixel so that we can better understand our users and whether or not our website is appropriately serving their needs.

For the collection of user data via LinkedIn Insights so that we can better understand our users and whether or not our website is appropriately serving their needs.

For the collection of user data via Google Analytics so that we can better understand our users and whether or not our website is appropriately serving their needs.